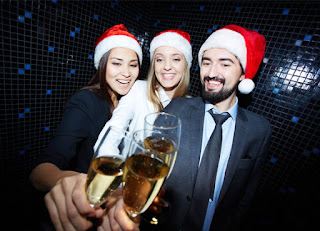 In Wales, Black Friday is the last Friday before Christmas, and the most popular night for office parties.

It’s thus called because historically, miners coming out of the pits covered in coal (and therefore black) would hit the town for a drink after work. As time has passed, the tradition is endemic in many Welsh industries, but spare a thought for the emergency services who find it incredibly hard.

This year is looking particularly challenging – with double the usual challenges.  That’s because many business owners are unwilling to hit the town on the Friday before Christmas Eve, so many of the parties have been booked the week before – however, most of the staff seem so far to be regarding this as an ‘extra night’ of partying and have made their own plans for the following week.

Trying to make plans for our own team meal was challenging – everywhere on both days was full, and that was before the end of October.  A friend who owns a bar in Cardiff is rubbing his hands with glee!

Whilst it’s indeed, great for hospitality, as an HR Software specialist, I see the other side of workplace Christmas parties.

On the day itself, HR sees increased holiday requests to get ready early, and hit the beer before the rest.  It’s easier if you have HR software with a built in leave planner, like Activ Absence, because you can restrict leave during busy periods using the system.  However, that’s not a common scenario in Wales.

Doing it over the phone or with a wall planner, faced with 10 leave requests all at once, lots of pleading faces, and 10 sob stories, managers can easily feel overwhelmed and just give in, leaving the office short staffed, or say no to some, leading to accusations of nepotism and a bad atmosphere when everyone is supposed to be socialising.

Then, after the party, there’s almost always fallout.  The faux pas, the post-party photos on social media, the well-intentioned teasing that got out of hand, incidents, allegations and alcohol fuelled arguments - the scenarios that mean HR rarely relax at staff parties.

Even if managers get through all that unscathed, Black Friday almost always heralds the start of a winding down at work that can escalate into further sickies, poor performance and a general lack of care among those who have to work up until Christmas Eve.

Normally, we are only talking a day or two, but with most Welsh businesses hitting the town a week earlier than normal, there’s a full week of potential low productivity followed by, in many cases, more partying at the end of it – I doubt there will be many minds focused on work in the week in between – and then, on the next party Friday, it starts all over again.

For managers, it doesn’t end there.

Tech can really help here, but there are only a few SMEs who have invested in absence management software in Wales (it’s a different story over the border).

While all the other staff are chatting about what they had for Christmas, HR will therefore have the annual joy of merging spreadsheets and manually calculating the end of year leave report, deciding who can carry what over to the next year, who did and didn’t use all their holiday and what next year’s leave allowances are for every member of staff.  These annual leave calculations can be complex for part time workers, and it typically takes 4 or 5 days in organisations with 100 staff or more.

Of course, not everyone has an HR Manager – small business owners are often left to figure it out themselves.  They, too, would really benefit from a system like Activ Absence which takes some of the pressure off at this challenging time of year. A new appraisals system is also probably on their wish list, so that when appraisals meetings start, usually at the end of January, they aren’t passing bits of paper to and fro and are actually delivering performance reviews that deliver improved performance!

There are lots of new rules expected for 2017, especially about contractors, pay rates etc. expected over the next 12 months and a looming Brexit, so without an easy way of communicating staff policy handbooks using software, managers could also be facing a long wait at the Photocopier.

For those managers who don’t get Santa’s software wishlist, this December is  harder than most – so we hope that staff will not judge them too harshly if they aren’t celebrating quite so loudly as everyone else.

As for those who are reading this thinking “I will do better next year”, it is still possible to get cloud based HR software in place by 1st January – and it costs less than you may think.

Either way, I wish the people who keep welsh businesses running a very Merry Christmas, and hope you escape the double Black Friday unscathed.