Why a little Flexibility is a good thing (despite the PJ's)! 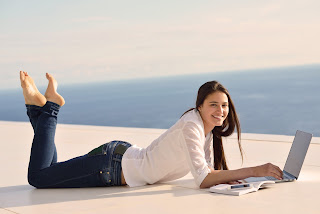 When bosses hear 'flexible working',  for some it conjures up pictures of their people sitting around in pj's and spend their days watching such delights as Jeremy Kyle.

I work from home sometimes so I'm sadly able to confirm the rumours about pj's, but I'd rather stick a hot poker in my eye than watch daytime TV, in fact one of the reasons I frequently work from home is because I struggle to work with any noise and I work more productively in the serenity of my lounge.  My other half is the opposite, he works better with chatter and music, the louder, the better.

We're both hard working and productive people - we just work differently.  It's a good example of how different things are important to different members of staff.

Working from home means people are able to create their own unique environment in which they will thrive, which is maybe why almost all the research undertaken to date shows that flexible workers are more productive and more loyal.

However, even offices who need the rigidity of a 9-5 structure could benefit by introducing a little flexibility.

Here's a few things to consider:

1. Do you want your people to be honest with you?

If it's the Wimbledon Final, the day of the World Cup England Match, a Welsh International Rugby Game. or even the first episode of the new Walking Dead or Game of Thrones, your people will know and a good chunk of the conversation with colleagues is likely to revolve around these topics.

We don't tend to plan for TV in advance, but that doesn't mean it doesn't matter.   If that critical TV or sports event starts at 5 o'clock, people are more likely to book holiday at very short notice or worse, develop a sudden 'illness' and need to go home early.  If it's in the early morning, chances are they won't be in at all.

Only this week, Lottoland did research which found that 1 in 10 UK fans who watched the US launch of Game of Thrones at 3am took the next day off work, with 47% of them pulling a sickie rather than taking official holiday...scary!

Without any policy governing this, those who don't take time off can feel resentful, whereas those who do are effectively rewarded for being dishonest - it decreases morale and encourages dishonesty, the last things you need in a workplace.

Letting the sports fans leave early or the Lost fans come in late may sound horrific and anarchic at first glance, but if people make the time up later in the week, so long as you have:


would it really be that disruptive to offer a little flexibility?

The one thing we've seen is that flexibility breeds loyalty - because it is fair, builds relationships and encourages qualities normally prized by employers.


2. Do you want your people to feel good?

We often forget that working parents are often torn by their desire to be good parents and good employees.  Making them choose the latter over the former is likely to be at the expense of their confidence and mental wellbeing.

Good employers understand people's home commitments and work with them.

Why force employees to miss their child's first school play, their child's medical appointments, or be unable to take holiday because they used all their leave to attend these?  It makes it harder for parents, and adds to the discomfort and guilt of being a working parent - but much of this pressure can be avoided by a little flexibility.

I was an hour late for work on my daughter's first day at school, because I wanted to take her myself that day.  Is that so very unreasonable?  My then boss didn't think so and was happy to let me come in 15 minutes early for the rest of the week to make the hour up.

It wasn't a big deal to my boss, but the difference it made to me in terms of feeling less guilty as a working Mum was incredible.  I'd have felt on edge if I'd phoned in sick and guilty if I'd gone into work.  This option worked for both parties, balanced my work and home life and was visibly fair.

3.  Do you want your business to spend its money on absence?

People are people, and they have a life outside work.  Organisations that offer flexible working arrangements see the lowest rates of absence.

There will always be people with poor motivation, an awful work ethic and a bad attitude, despite your best attempts to weed them out at the interview stage.

However, most people who take sickies are not in this group.  They think that they aren't 'hurting' the business, but are inadvertently costing your company a fortune - in fact, some estimates put the cost for UK businesses as a whole at £29 billion.  In most cases, the ability to work around the reason, e.g. a medical appointment, a TV programme or even a late night, would be preferable both for the employer and employee,

With the right systems in place and a little flexibility, you can manage and record these minor flexibilities, let staff make the time up and avoid paying them for a whole day of 'sickness'.

As for the negative nellies who would throw sickies even if they worked one hour a week, the same system would let you pick them up more quickly and help the disciplinary process sort them out more smoothly - to me, its a no brainer.

Getting the right systems in place is the key to offering flexible working, and you remain in control of just how flexible you want to be.

Activ Absence isn't just something we sell, its something we use - and I'm grateful it helps me work in my PJs!  However, there's a whole lot more to flexible working than working from home and I'd encourage any employer to take a second look at including it in your 'absence management toolkit'.